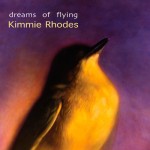 I’ve been listening to Kimmie Rhodes for many years more than I have Eliza Gilkyson. I first encountered her as the proverbial rose among thorns in a mid-90s Austin City Limits program where she appeared with Waylon, Willie, Billy Joe, and Kris; to hold her own in such considered company one rightly assumed she must have stones of substance. The deal was sealed listening to her (again)at the Edmonton Folk Music Festival, and her catalogue is one I continually explore; West Texas Heaven is one of the most perfect albums I know.

Like Gilkyson, Rhodes has a consistent way with songs while at the same time inviting the listener to discover each subtlety of song and gem of inspiration interdependently with what she and her production team capture. If that makes any sense, which I don’t think it does.

With a tight five-piece band providing support, Rhodes has produced only the latest in a string of albums capturing the wistful majesty of one of North America’s most beautiful voices. With music this lovely, this heartfelt and sincere, one just knows that the soul is every bit as special as the talent it fosters.

Joe Ely slides in for a duet of Donovan’s “Catch the Wind.” Propelled by John Gardner’s shaker, the song’s arrangement is quite unusual (at least to these ears) as it starts with a distinctive guitar focus (I believe from producer/son Gabriel- didn’t he used to be Gabe?) and imperceptibly metamorphoses into a rich, piano showcase for Mike Thompson.

A distinct British influence is heard in a few places. “Turnin’ My World,” a song from other son Jeremie, induces a bit of Kinks’ “Waterloo Sunset”-era influence into the proceedings while Kimmie’s own “Luh Luh Love” channels Kirsty MacColl via Muscle Shoals.

The preceding may be the strangest and least sensible paragraph I’ve ever written, but each word appears true to me!

Dreams of Flying is likely not the best place to be introduced to Kimmie Rhodes, and I’m not exactly sure why I feel that way. Perhaps the album just doesn’t seem as accessible as some of her previous albums. Still, discovering an artist like Kimmie Rhodes- one who flies under the popular radar even within the fairly underground genre (if it can be even called such) that is Americana- is an intimately personal experience. If this is your first experience with Rhodes, maybe it’ll spark as intensive a survey as my first listen to her did 15 years ago.

I certainly hope it does.

As always, thanks for visiting Fervor Coulee. Donald