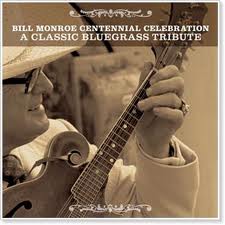 There has seemingly been no end to the ‘tribute’ offerings to be produced in this the Year of Bill Monroe. While some of the recordings have been highly original- Laurie Lewis’s set Skippin’ & Flyin’ and Niall Toner’s ”William Smith Monroe,” as two examples- others have been less so, although still enjoyable.

Similar to Rebel Records’ companion albums With Body and Soul (secular) and Let the Light Shine Down (gospel), this two-disc Rounder set pulls 27-Monroe songs from the vaults. Performed by a variety of artists- everyone from the Bluegrass Album Band to Claire Lynch, Vern Williams, and the Nashville Bluegrass Band- the overall quality of the selections is high. Five tracks from the Bluegrass Album Band and three tracks from both the Nashville Bluegrass Band and Michael Cleveland may seem like overkill, but that would be nitpicking, especially considering the musicianship present on these cuts. While it times out at just over 80-minutes, one has a hard time cutting any of the tracks which would have allowed it to be a single-disc issue. Still, I bought my copy of $14.99 so I can hardly complain from an economic point of view.

While some folks may have all of these catalogue tracks in their collections, the package is still of interest for significant reasons, not the least of which is that it provides a darn enjoyable listen. The lengthy essay from Bill Nowlin is very readable and contains enough information to serve as a reminder of how much one still doesn’t fully understand about Monroe’s music and life. A lively new take of “Close By” from vocal darlings Dailey & Vincent has proven popular on bluegrass radio.

A fine collection that would be appreciated by almost all bluegrass fans.