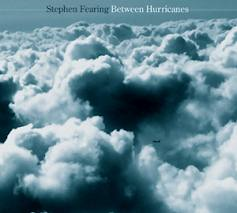 Getting most of his notice as a third of Blackie & the Rodeo Kings, Stephen Fearing has been slowly (very slowly) increasing his profile on the Canadian folk scene for the past twenty-five years. While BARK has brought regular attention to Fearing since the release of High & Hurtin’ in 1996, Fearing has remained more under-the-populist-radar than his partners Colin Linden (who has become familiar to some with his sideman appearances on Nashville) and Tom Wilson (Lee Harvey Osmond).

When it comes to making music, Fearing has consistently, if infrequently, released albums of substance and growing appeal; Between Hurricanes, like Yellowjacket and That’s How I Walk before it, simply becomes more interesting and enthralling the more one listens.

Opening with clean picking and an immediately appealing groove, “As the Crow Flies” sets the course for an album of constant delight. “Rising from the ash and the dust, you turn the key from hope to trust…look ahead,” signals that Fearing has perhaps turned to a new chapter. “As my car flew off the road, images and memories were running through my head; promises I never kept, lies and pretty faces in my bed…” he sings in “Don’t You Wish Your Bread Was Dough,” touching on those regrets we all own.

“Cold Dawn” is staggering, as are “These Golden Days” and his reading of “Early Morning Rain,” and each in different ways and for a variety of reasons.”Keep Your Mouth Shut” is a raucously BARKy, while “The Fool” is as acute as the finest ballads ever sung by Marty Robbins or written by Kris Kristofferson.  In many ways, Between Hurricanes reminds one most frequently of an album The Band (whom I have been listening to quite steadily recently) might have made had they been born and raised thirty years later.

I suggest that from my perspective, Fearing has never sounded in better voice, but that seems a bit much as he has  always had a pleasing one; still, things seem a bit more focused, more mature even, if such makes any sense. Let it stand, then, that he sounds wonderful throughout the album.

Inhabiting a space somewhere between John Hiatt’s muddy Americana waters and Bruce Cockburn’s warm, comfort folk, Between Hurricanes is a bit minimalist in places, but never feels unduly spare. Co-producer with Fearing, John Whynot, serves as Fearing’s musical foil, contributing everything from piano and organ to percussion, bass, and autoharp.

Stephen Fearing is on a western swing, appearing in Saskatchewan and  Alberta this week and next including at Red Deer’s Elks Lodge on March 7; all details at his website.