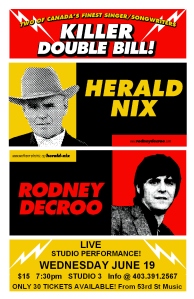 A show coming up in Red Deer next week- spreading the word. Herald Nix (who I saw open for The Clash a lifetime ago) and Rodney DeCroo (who I’ve written about here) team up for a ‘house’ concert…but not in a house. Details below. I’ve seen both within intimate settings, and they are superb, me thinks.

Hey Everybody! Heads up on a show next Wednesday June 19th…. Next week! It’s a Studio concert featuring Rodney DeCroo and Herald Nix, which will be very much like a house concert. Hoping to have about 30 people. There will be refreshments available. Show starts at 7:30, Tix are $15 available at 53rd St Music. Should be a fun time in a nice intimate setting. Call 403.391.2567 for more info.

“What A World” sounds like nothing else in the roots marketplace, a masterpiece in which style and substance create a luminous, resonant glow. It’s one of a kind, a work of sublime musical art.” states the Toronto Star. The UK press wonders “If a live show matches the intensity and power of the performances on this collection of songs, it would be spectacularly good. He thumps out these country blues songs with such fearless zest and fire its like being transformed to another time and place. This really is a terrific record.”

Rodney DeCroo sings stark, haunting songs that Canadian music magazine Exclaim called “Uneasy listening at it’s best”. The Vancouver Sun says that while his “powerful lyrics are both mesmerizing and wrenching, the songs are filled with a sense of defiant beauty.” Mike Usinger music editor at Vancouver’s Georgia Straight Magazine, writing about DeCroo’s most recent album, says that DeCroo is more than a song-writer, he’s also a poet: “Once you’ve heard the flat-out devastating Allegheny, it somehow seems wrong to label Rodney DeCroo as a songwriter. For the past decade, the 45-year-old has been seen as exactly that, his raw, often breathtaking records falling under the mean-nothing umbrella of Americana. Raw, captivating, and essential, The Allegheny rebrands DeCroo as an artist determined to challenge himself and his fans. He’s produced what will be remembered as one of the best, most unflinchingly honest records of the year. If the singer, poet, somehow isn’t on your radar yet, this is where you really need to ask yourself why.”
http://northern-electric.ca/rodney-decroo