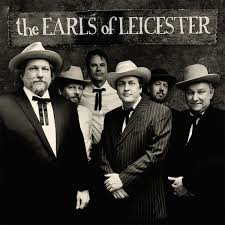 The Earl of Leicester had nothing to do with bluegrass music. But, The Earls of Leicester are most certainly bluegrass through and through. The ‘Earl’ refers to Scruggs and ‘Leicester’ is pronounced Lester, as in Flatt, and this six-piece band, whose performance at the Hardly Strictly Bluegrass Festival of a couple weekends ago I am currently streaming, is pretty darn exceptional. So is their debut album, released last month on Rounder Records.

The Earls of Leicester

The Earls of Leicester

A welcome breath of grassiness, The Earls of Leicester are not most obviously about innovation, ‘big tents’, or pushing the music forward. This bluegrass supergroup is all about celebrating and honouring the past, recreating the lively, engaging music of arguably bluegrass music’s greatest outfit—Flatt and Scruggs & the Foggy Mountain Boys—for the generations that never had the opportunity to experience their groundbreaking music during the band’s long run, 1948-1969.

The Earls of Leicester are, to use the words of founder Jerry Douglas, “an event band.” While the band may eventually progress beyond the current intent, for now and on the basis of their debut album, The Earls of Leicester are all about recreating the formative bluegrass music of Lester Flatt, Earl Scruggs, and their Foggy Mountain Boys. And if you can’t get enough of digging holes for Darlin’ Corey, spending time in the calaboosh, dim lights, thick smoke, and corn shuckin’ there is plenty within these 38-minutes and 14 songs for you to find of interest.

Shawn Camp doesn’t attempt to replicate Lester Flatt’s relaxed, unforced style of bluegrass singing. Rather, Camp has found his own way of singing these songs that is comfortably within the parameters established by Flatt while maintaining his own personality. Listening to “On My Mind” and “Big Black Train,” one begins to feel that Camp has dug deep to find within himself a new way of singing, a new voice…one that is, in places, pleasingly similar to that of Flatt.

Douglas was greatly influenced by long-time Foggy Mountain Boy Uncle Josh Graves, and—no doubt, since it is his band—the Dobro is front and center on many of these songs, perhaps given a tinge more prominence in places than Flatt & Scruggs would have considered. On the whole, the arrangements of the songs and their performances are quite true to the originals recorded from the mid-50’s to the mid-60’s.

Tim O’Brien fills Curly Seckler’s shoes on this recording, and does an admirable job in recreating the clean mandolin playing of the period while reaching high on the tenor parts; when he steps up to the mic on “Dig A Hole in the Meadow,” it is evidence that some ‘warhorses’ should never be retired. Son of Foggy Mountain Boy fiddler Paul Warren, Johnny Warren takes care of all the fiddle parts, while Charlie Cushman has the unenviable responsibility of recreating Scruggs’ 5-string work. As expected, their performances are excellent, as are the contributions of Barry Bales, reigning and three-time IBMA bass player of the year.

Many of the songs and tunes most frequently associated with Flatt & Scruggs—”Rollin’ In My Sweet Baby’s Arms,” “Foggy Mountain Breakdown,” “Earl’s Breakdown,” and “Salty Dog Blues,” to name a few—are avoided in favour of some that may be less commonly heard on amateur stages. Great decision. Ditto, “Polka on the Banjo,” thankfully. Only four of the songs appear on The Essential Flatt & Scruggs while the Mercury recordings are entirely avoided. “The Wandering Boy and “I Don’t Care Anymore” are highlights, but so are the frequently encountered “Don’t Let Your Deal Go Down,” on which Warren contributes bass vocals, and “Dig A Hole in the Meadow.”

The recording appears flawless: the bottom end is appropriately heavy, Camp’s guitar notes ring true, the vocal stacking is precise, and the instrumental mix is stellar. It is one of the better sounding bluegrass albums I’ve recently experienced. Find a flaw, I dare ya!

If such matters are important to your listening pleasure, the only instrument on the album that couldn’t have appeared on a Flatt & Scruggs recording is O’Brien’s 1976 mandolin: the instruments range from 1929 and 1930 Gibson banjos to Paul Warren’s fiddle, used on Foggy Mountain Boy recording sessions.

By performing the music of Flatt & Scruggs in such an honest and true manner, The Earls of Leicester can’t help attract those not deeply familiar with these classic sounds but who are interested in acoustic, or jam band, folk, and bluegrass music. Therefore, it could be argued, The Earls of Leicester are all about pushing bluegrass music forward, expanding that ‘big tent’ that gets so much attention, and encouraging others to find innovation within the beautiful constraints of this wonderful—and timeless—music.

Addendum- 2014 October 24: I received an email today that included Jerry Douglas’ reaction to my review, and which I felt I needed to share- one doesn’t often get positive feedback from those reviewed: “Hallelujah! I have been heard. This fellow gets what I wanted to do. Never seen a better review. Let’s hope these continue. Hallelujah! Just what I need to start my day here in Tokyo.” I’m pretty sure he was jet-lagged, and (not knowing if Flux- let’s see if Chris Jones catches me nickname dropping here- drinks) perhaps inebriated. Still, pretty cool! Glad someone thinks I hit the mark. Donald

2 thoughts on “The Earls of Leicester review”