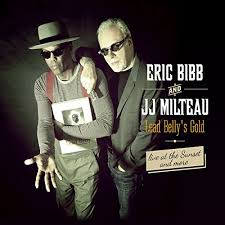 Lead Belly’s Gold: Live at the Sunset and More

I been a gambler, I been a rambler,

I been called a low-down roustabout,

Been a convict man down in Sugar Land,

An’ I know what a chain gang’s all about…

On his self-penned song that closes Lead Belly’s Gold, Eric Bibb creates Huddie Ledbetter’s testimony of experience. The refrain, “I been swimmin’ in a river of songs ever since I was born,” captures the magnitude of Lead Belly’s repertoire and influence, songs traditional, borrowed, and his own, a broad range of presentations styles, and—of course—a tremendous and lasting effect on the blues, folk, and popular music long after his passing.

“Swimmin’ in a River of Songs” might have made a more accurate title for this album—mostly live, but augmented with five studio tracks. Bibb, long a favorite with modern roots listeners—if you’ve missed him, you’re well advised to Get Onboard and explore his many recordings, two of which seldom sound the same, so broad has his palate been: in addition to Get Onboard, I am partial to his set with Habib Koitè, his collaboration with his father Leon honouring the impact of Paul Robeson, and Blues, Ballads, and Work Songs—has outdone himself on this generous recording.

Working with a French harmonica player with whom I was not previously familiar, Jean-Jacques Milteau, and a tasteful drummer-bass rhythm section, and background vocalists including Big Daddy Wilson, Bibb and Milteau present Lead Belly’s music not as archival elements of a previous generation, but as vibrant, compelling songs that are not only timeless, but relevant to contemporary events (connections to modern migrants and refugees, civil unrest and distress, and the desire for dignity are apparent) and vital and informative to an appreciation of the intertwined folk and blues traditions.

Bibb’s voice is so smooth and warm—like most of us, he hasn’t spent time on a chain gang in Louisiana—it may take a moment for the uninitiated to ‘buy into’ his interpretation of songs of hardship. But, as Bibb explains within the album’s extensive, informative, and appreciated notes, Lead Belly’s voice and music always contained optimism and light. It is this element of the blues, of folk, that Bibb holds to most securely.

I been a rover, been a chauffeur,

But truly, I’m a troubadour,

I got the chance to play in Paris, France

An’ I seen things I never seen before…

Depending on experience, we’ve heard these songs dozens or hundreds of times—“The House of the Rising Sun,” “Midnight Special,” “Rock Island Line,” “Grey Goose”—and maybe we’ve heard them performed in bigger productions, and perhaps even under more intimate circumstances. However one has come to these songs, I don’t think we’ve heard them exactly like this. Bibb’s interpretations are so confident and grounded that these may become the versions I hear in my head when contemplating the history and weight of these songs.

I’m no fan of harp players—I just don’t get it, just like I don’t get Dancing with the Stars, Pinterest, and surf music—but Milteau’s playing throughout this album is completely enjoyable. Would I like the album just as much without it? Yup, but this is the sound Bibb and his collaborators desired, so I’ll go along with it. I do think “Bring A Little Water, Sylvie” is stronger for Milteau’s contributions.

While the album closer “Swimmin’ in a River of Songs” is a stunning imagining of Lead Belly’s viewpoint, it isn’t the only song on which Bibb and Milteau delve into his persona. “When I Get to Dallas” and “Chauffeur Blues” also enlighten listeners to Lead Belly’s experiences in segregated America, much as “Bourgeois Blues,” “On A Monday,” and “Pick a Bale of Cotton”—all included here—did nearly a century ago.

Recorded in a small club in France, and featuring a Canadian connection not only through the venerable Stony Plain Records label but also with the significant contribution of Michael Jerome Browne to the closing track, Lead Belly’s Gold is a blues-folk album of significance. Reaching out to the past, Bibb and Milteau illuminate it to reveal shadows within the present.

Gypsy woman tol’ me in Nineteen an’ ten

You’ll be a big name, destined for fame,