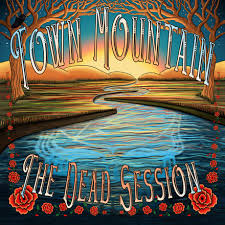 I was planning on being productive today; it isn’t every week I have a five-day weekend, certainly, and one should make use of such to accomplish some writing. But, finding myself in the middle of those five days today, someone on Twitter sent out a link to a 2011 Ray Wylie Hubbard concert on YouTube, and well—you should be able to figure out the rest.

One of the things I was going to do today was write about a nifty little 2-song single put out today by Town Mountain, an Asheville, NC bluegrass band that I quite like. I’ve written about the group a couple times. My review of Leave the Bottle was favourable, and in retrospect, too restrained; I think I was feeling that I had written too many 4- star reviews around then, and pulled them back to 3.5.  I was less enthusiastic about their live release of last year.

Town Mountain has devoted considerable effort to producing what appears intended as a one-off, a two-song set entitled The Dead Session. Given the strength of this recording, the talented outfit may be well-advised to consider a full album release of Grateful Dead songs.

The two songs chosen for this set are “Mississippi Half-Step Uptown Toodeloo” (just as I was typing ‘Mississippi’ there, Ray Wylie introduced his most excellent song “Mississippi Flush,” saying ‘Mississippi’ just as I typed the third ‘s’…which was awesome enough to mention, me thinks) and “Big River.” Yes, I’m still listening to the live show; how can you turn off Ray Wylie Hubbard mid-show?

I’ll pause Ray Wylie to allow myself to get the soaring sounds of Town Mountain back into my head, not that I really need to because I’ve already listened to the single four or five times since receiving in the mail on Monday.

Okay, I lied; didn’t mean to, though. I was going to pause Ray Wylie, but then he started in on another story—this one about prayer —and I couldn’t…so, I pause the writing of this little blurb for another 30 minutes. The world will survive, and Town Mountain will understand. (BTW, Twitter tells me it is his birthday, too.)

At a mere eleven minutes, one wonders why the group bothered pressing up physical copies of this little pair (hard to imagine they’ll make their money back) but one is glad they did—and even more pleased that their publicist sent a copy my way. The cover art is gorgeous (by a noted Dead poster artist Taylor Swope), and almost nothing beats holding music in your hand.

As sung by Jerry Garcia, “Mississippi Half-Step Uptown Toodeloo” is an archetypal Dead song—groovy, flowing (meandering, perhaps, depending on one’s perspective), and lyrically woolly. I’m far from a Grateful Dead connoisseur, and wasn’t familiar with the song until I Googled it the other day; shoot me. I have six or eight of their albums on the shelf, and enjoy them when I play them, but I certainly am no expert.

Town Mountain’s version is even more appealing to me—the incorporation of bluegrass elements like 5-string and harmony parts strengthens the song. Bobby Britt’s fiddle playing also brightens “Mississippi Half-Step Uptown Toodeloo,” and while Garcia’s voice isn’t something one soon forgets, Robert Greer more than holds his own; his distinctive singing is certainly a Town Mountain highlight. Town Mountain stretches out a little here, and I quite like what they’ve done.

The information at the Town Mountain website tells me that The Grateful Dead performed Johnny Cash’s “Big River” almost 400 times. I did not know that. Again, the band does the job on this one. Jesse Langlais’ banjo sets the tone for this rendition, and they keep things concise while providing sufficient instrumental interplay, including pedal steel from Jack Deveraux.

So, for a couple bucks on iTunes you can get a pretty cool listening experience courtesy of Town Mountain. I would certainly suggest the disc, available from the band’s website. Even if you aren’t one for following every dead-end and detour the Dead have sent out, this is a listening journey that I believe is well worth exploring.