I don’t understand why record labels and bands release ‘regular’ albums in December. For gift giving and year-end splurges, I understand the compilations, box sets, and special editions being released late in the year.

Pinecastle Records released two bluegrass albums in December, 2016. Both are really strong and distinctive albums, but weren’t heard until most of the ‘year-end’ lists were compiled. A shame because-a month after their release-they haven’t received as much attention as I think they deserve.

Blue Mafia is one of my favourite bluegrass bands. I’ve yet to catch them live-living on the edge of the frozen prairies and forests of Alberta does have some drawbacks-but their two previous albums were immediately appealing. Their third release is just as strong, and is one that I’m going to be listening to a lot as the next months unfold. My review has been posted at Country Standard Time.

My review of their second album, Pray For Rain, is posted here. My Cold Heart, one of the finest bluegrass debuts I’ve reviewed, is written about here. 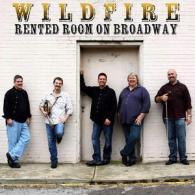 Wildfire is a group I’ve been listening to since their first album was released in 2001. They have undergone all sorts of lineup changes over the year, but Robert Hale and Curt Chapman have been the consistent members and have just released their fifth recording. My review has been posted at Country Standard Time.

An excellent start to the 2017 bluegrass season. Thanks for visiting Fervor Coulee. Donald

One thought on “Blue Mafia and Wildfire reviews”