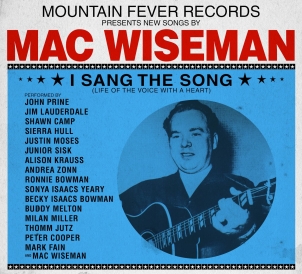 With all due respect to the folks who have released excellent bluegrass and country albums this year, and those who will undoubtedly do so in the coming months, we have our 2017 Americana/Roots album of the year.

An incredible undertaking by Peter Cooper and Thomm Jutz, the most important element of the thirteen songs comprising I Sang the Song: Life of The Voice With A Heart is the source material, Mac Wiseman himself. Nearing 92, Wiseman was born in 1925 and recalls a time few of us can picture outside history books and re-runs of The Waltons. Wiseman is a man who knew A. P. Carter and has now had Sierra Hull share a song with him. Think about that for a half-a-moment.

“It ain’t bragging if you’ve done it,” asserts John Prine gently within the title track, revealing for the unaware that Wiseman performed alongside the acknowledged masters of 20th century roots music. A member of both The Foggy Mountain Boys and The Blue Grass Boys, as well as a charting, featured performer in his own right, Wiseman is a founder of the Country Music Association, and inductee to both the International Bluegrass Music Association Hall of Fame and the Country Hall of Fame.  A label executive and producer—and one of the finest bluegrass gentlemen I’ve had the pleasure of encountering, however briefly— Wiseman was always far more than “just another young hillbilly.”

The majority of these songs are obviously bluegrass, a few clearly country, and others find that sweet, magical spot between the two. Cooper and Jutz had the inspiration and wisdom to listen to and converse with Wiseman, finding in his stories threads to embroider  the ten new songs created together to communicate a compelling narrative of anecdote.

Within a song, Wiseman (“The Guitar,” via Moses and Hull) takes us from receiving his first Sears Roebuck, ragtop box, to the eventual day he stopped “playing in G and singing in C” to nail “There’s An Empty Cot in the Bunkhouse  Tonight” for an audience of one. As the album unfolds, his experiences through to the hardships of the depression (“Barefoot ‘Til After the Frost”, “Three Cows and Two Horses”) are revealed in a natural, homespun manner capturing the vernacular of his rural upbringing down to cold “feet just as red as a gobbler’s snout.” In the universal and frustrating balance poverty, even when things improve for Wiseman’s family (“Manganese Mine,”) another discovers only hardship and tragedy.

“Simple Math,” one of two sang by Americana icon Jim Lauderdale, details further experiences from Wiseman’s youth following him into early gigs as a professional musician including his big break playing Molly O’Day sessions. Lauderdale, one of the most prolific and versatile vocalists working today, adroitly relates the simple truths of Wiseman’s observations.

As compelling as the connections to Wiseman’s life are across the album, the fact that each song stands independent released from context is indicative of their significance. The bluegrass chart hit “Going Back to Bristol,” sung by Camp, radiates universal appeal, whether you’ve ever been near the border community, cut a side with Flatt & Scruggs, been near a Studebaker, or not.

Alison Krauss joins Wiseman on the closing benediction “‘Tis Sweet to Be Remembered,” one of his earliest successes, for a performance joining generations in hopeful love of music and life. Wiseman drops in on a few of these numbers, providing a foundation for the lyrics and music, but also allowing those with the greatest of admiration to communicate his story through the voices of generations influenced by “The Voice With A Heart.”

For thirty-eight minutes, timeless memories are communicated. Through time, these performances will be shared to become part of our collective memory.

Thanks for visiting Fervor Coulee. @FervorCoulee