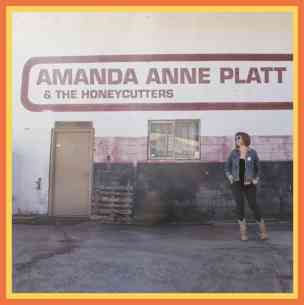 Having recorded four impressive albums as The Honeycutters, including the masterpiece that was 2016’s On The Ropes, Asheville, NC’s outstanding roots outfit has re-branded themselves as Amanda Anne Platt & the Honeycutters.

Featuring the consistent Honeycutters line-up of Matthew Smith (pedal steel and electric guitar), Rick Cooper (bass), Josh Milligan (drums and percussion), and Platt (lead and harmony vocals and acoustic guitar), with the addition of Evan Martin (keyboard including Hammond B3), the group’s approach to music has continued to evolve, becoming increasingly mainstream while retaining the appealing and authentic qualities that have made them one of the most satisfying Americana outfits recording.

Platt is a strong songwriter and an impressive and memorable vocalist. She has that important capability to write in a variety of voices, making each genuine and authentic to the experiences conveyed.

Again co-produced with roots and bluegrass veteran Tim Surrett, Platt gently establishes the group as a vehicle under her control launching into “Birthday Song” as the self-titled album’s lead track, a song that brings to the fore Platt’s command of writing, singing, and song arrangement. Deceptively languid in atmosphere, and sounding like no one as much as Natalie Maines, the introspective Appalachian honky tonk singer observes that with the passage of years and the compounding of commitments, “some days the answers just get farther.” Similarly, one observes initial forays toward adulthood with “Late Summer’s Child.” The group could do worse than to seek inspiration from the likes of the Dixie Chicks.

One of the most acutely realized examples of country-based Americana recently released, Amanda Anne Platt & the Honeycutters comes in at a generous 54-minutes, and doesn’t waver in focus or intensity. Utilizing a focus on lyrical rhythm similarly to Zoe Muth’s modern classic “If I Can’t Trust You With A Quarter,” “The Guitar Case,” with an impressive guitar and keys instrumental foundation, finds our road warrior focusing on the positives of the chosen life. Platt doesn’t take the easy way and bask on the weary harshness of life, preferring to find positives when possible. A relationship has crumbled amicably within “The Road,” and “Diamonds in the Rough” looks at various observed circumstances through warmly colored lenses.

Consistently across the album, The Honeycutters demonstrate their ability to ideally frame songs to complement Platt. As she’s the group’s songwriter, this is obviously by design but that doesn’t detract from its effectiveness. Intriguing and timely progressions of notes highlight songs at just the right moment, as when Platt is contemplating the last five years of a relationship (“Brand New Start”) and with a bit of Don Rich-inspired flavor on “The Things We Call Home.”

Another welcome offering from Amanda Anne Platt and her group; as always true, country music is in fine hands.