It is usually painful to review your writing from a distance of years. Or, maybe it is just me who finds that to be the case. Might mean something…

No amount of prodding can make me re-read what I wrote for The Gateway beginning some 33 years ago, although I am tempted: I remember the Katrina Leskanich interview I did as being pretty good. However, the majority of what I wrote was—I am confident—awkward, artless, and anguish-inducing; my patient editors could only do so much. Going back into the Fervor Coulee vault then…

When I first heard Jeffrey Halford’s music over fifteen years ago, I knew I like it. I wasn’t sure how to write about it, but I tried. Here is what I wrote about Hunkpapa in February, 2002: 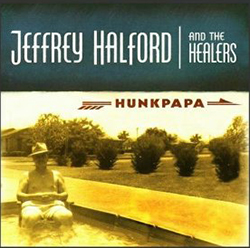 I was nothing if not enthusiastic.

A coalescence of Mike Plume energy and Lucinda Williams’ poetic gifts, Jeffrey Halford is more concerned with authentic mood and melody than contrived slickness.  Writing primarily bluesy-country shaded story songs, Halford doesn’t allow introspection to interfere with a rock-propelled groove.  Coloured by Chuck Prophet’s guitar, “Radio Flyer”—a love song about a dad, son, and wagon that documents the passage of time—is but one of Hunkpapa’s standout tracks: “we look beat up but we work just fine.” “Satchel’s Fastball” and “Memphis” are songs for a warmer season, music that roars down Highway 1 while “Oh, Susanna” and “.44” recount impetuous acts of regret.

Writing for the local daily, space was at a premium, but attempting to be succinct allowed me to a freedom to experiment with stylistic writing I would have otherwise avoided. Reading this today, for the first time in a decade and a half, I do cringe a little. But, I am comfortable with that because—on a positive note— a new Jeffrey Halford album has arrived for me to review! And it is playing as I try to recall why I haven’t listened to Halford nearly enough in the intervening years.

Three years later, Railbirds was released, and I again had a chance to write about Halford for the Red Deer Advocate and its seven readers who cared about my kind of roots music:

Emphasizing guitar based roots-rock over narratives, Halford’s imagery rich release lacks the lyrical breadth of his previous disc Hunkpapa.  Wielding a variety of six-strings- acoustic, electric, resophonic- and dropping some tasty slide into a couple tunes, Halford delivers a satisfying album of blues-based rock tunes that bring to mind mid-career Tom Petty and Blackie & the Rodeo Kings.  Augie Meyers adds atmospheric Hammond B-3 organ to a pair of tunes.

Wow! Even fewer words. I listened to Railbirds again this week, and I still enjoy it, more than the middlin’ review above would suggest. And, I notice at Halford’s website, another writer has made the Tom Petty connection: beat ya to it!

But then that was pretty much it. I listened to the albums (maybe) two or three times in the ensuing years, and I am pretty sure I played a track on the radio one July at the University of Lethbridge station while working on my Masters. However, and as new music continually arrived to be reviewed, Halford faded in my memory. I continued to associate positive thoughts with his music, I just didn’t bother to search it out.

Then Lo-Fi Dreams arrived in my mailbox, sent by the same publicist who got Hunkpapa into my hands in the first place; thanks, Martha. To catch up, earlier this month I purchased the downloads of Broken Chords and Rainmaker, and recalled as if fresh my enthusiasm for this singer and guitarist. (Yes, again, writing a review costs me money! How was I able to pay bills writing in 2001-2012? Oh, yeah…back then, outlets paid. I digress.)

“Thunderbird Motel,” “Vinyl,” “Dead Man’s Hand,” and “Ninth Ward” have quickly become favourites. With the exception of Halford, all the names associated with The Healers have changed while I was otherwise occupied. Co-producer (with Halford) Adam Rossi handles drums, keys, and percussion as well as harmony vocals, with Bill MacBeath handling the deep notes. What hasn’t altered are Halford’s obvious strengths.

His voice is only slightly different than it was fifteen years ago, seasoned by time as some like to say, but definitely not harsh or haggard. Consistent is his ability to strengthen his country-blues-rock sound with lyrics that appear like precious pearls of poetry. In “Two Jacksons,” Halford captures the power of positive changes as acutely as anyone since Springsteen railed about needing to change his clothes, his hair and face in 1984: “torn and frayed, and in need of repair” our hero reveals, but with a new jacket, anything seems possible. Similarly, waiting “behind ‘Door #3′” may just be what you’ve been looking for.

Emphasizing the groove, ‘the feels’ of his songs, Halford eases slide into several tracks, and that National sure has a big sound. The bluesy “Elvis Shot the Television,” as did songs on Railbirds and Broken Chords, favourably brings to mind Colin Linden. “Bird of Youth” is close to rock ‘n’ roll, and “Good Trouble” gets similarly raucous. I am really awful at being able to identify specific songs/singers that new songs remind me of (like, mental blockage bad) but “Sweet Annette,” has my brain spinning. Antsy McClain, perhaps? Auditory allusions aside, this is a crackerjack performance—a slice of Americana that honours all meanings of the word.

Featuring some of the album’s finest guitar sounds, “Great Divide” takes us gently to the end of Lo-Fi Dreams, a soothing, challenging listen from start through completion. It isn’t a lot different from Rainmaker, a bit louder perhaps—a production choice? The one-sheet mentions the use of “vintage lo-fi amplifiers and guitars like the Sears Silvertone, Danelectro, and Harmoney brands from the 1950s and ’60s…” none of which means much to me. It does hint that Halford was searching for a specific sound on Lo-Fi Dreams, and I would suggest he was successful in the pursuit.

Lo-Fi Dreams is a welcome reminder of, as if we needed it, how many roots and Americana artists there are that we haven’t before encountered…or who we have neglected for far too long. Jeffrey Halford and the Healers are again at the fore of my thinking: this time, I’m going to make sure they stay there.

Thanks for visiting Fervor Coulee. See me on the tweetsite @FervorCoulee.

One thought on “Jeffrey Halford & the Healers- Lo-Fi Dreams review”