More than 15 years ago, I started a feature in the local bluegrass association’s newsletter that I called “Gold…In A Way.” Each issue I would examine a bluegrass ‘back catalogue’ title that I appreciated. In this way, I looked at albums that either I missed writing about ‘the first time around’ or albums that pre-dated the time I began writing about roots music. These were albums that I thought were important, albums I cared about for some reason. Of course, the only way these albums would ever be ‘gold’ is in their musical value, not in copies sold. This time out, I look at a vintage release from the Father of Bluegrass music, Bill Monroe. 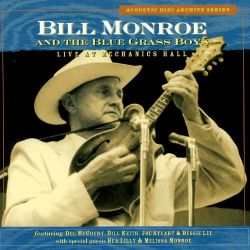 I’ve written it before, and I hope to write it again: Thank goodness a teenaged David Grisman could think of nothing more exciting than to haul his recording machine up and down the east coast of the United States recording bluegrass ham sessions and concerts.

Captured live in November 1963, the Blue Grass Boys in this Worcester, MA set are Del McCoury (IBMA Hall of Fame class of 2011), coming near the end of his brief tenure as Monroe’s lead vocalist and guitar player, Bill Keith (IBMA Hall of Fame 2015), the innovative 5-stringer who gave up his first name for Brad when the authoritative Monroe decried there was to be one ‘Bill’ in the band, and the ever reliable Joe Stuart on fiddle. Bessie Lee Maudlin holds down the bottom.

For those of us who cannot get enough live Monroe (IBMA Hall of Fame 1991), this 40-plus minute set was a welcome addition to our collections when it was released by Grisman’s Acoustic Disc label. Monroe shines on near every number with “Devil’s Dream” being especially fiery on this evening, and “Rawhide” sounding flawless despite Monroe’s assertion otherwise. McCoury takes a few leads, and while his voice had not yet fully acquired its unique qualities, greatness peaks through. What is in evidence, on “Footprints in the Snow” for instance, is McCoury’s ability to carry a song.

The mix doesn’t do justice to Keith’s playing, but Stuart is clearly heard throughout. The vocals are largely duos, with a couple trios and a quartet (“I Saw the Light.”) A pair of numbers featuring Monroe’s daughter Melissa are situated mid-set, and serve only to illustrate the foibles of nepotism; while not unlistenable, one doubts they will ever be considered essential except as part of the historical record.

The heart of the show includes some of Monroe’s most enduring numbers-“Mule Skinner Blues,” “Footprints,” “Blue Moon of Kentucky,” “Rawhide,” and “John Henry.” While not surpassing the more familiar studio renditions, these takes are all excellent live performances.

Bea Lilly (IBMA Hall of Fame 2002). of the Lilly Brothers who were features in this ‘package’ show, comes to the stage to sing a duet of “What Would You Give in Exchange” with Monroe. Lilly accepts and meets the challenge of singing Charlie Monroe’s parts. With “Uncle Pen” and “Blue Ridge Mountain Blues” the historic (largely because it was recorded) show comes to a close much too soon.

For a recording of some age, the audio quality is simply terrific, and even casual listeners should be able to appreciate the performance. The 24-page booklet is loaded with information, as well as numerous photographs of the 1963 edition of the band.

The liner notes by IBMA Hall of Fame 2014 member Neil Rosenberg are typically insightful and clearly communicated, reading as comfortable reflection of a special time in bluegrass history. The folk boom was just beginning, but much of the scene had not yet discovered bluegrass music; Monroe was, as Rosenberg writes, “on the threshold of recognition that would transform him into an icon of American music.”

This release is heartily recommended. I’ve been listening to it at least annually since its release and never tire of its sparkling liveliness.