Even with fewer than a dozen albums featuring his name, David Davis has become a near-legendary member of the bluegrass fraternity, a true follower of The Monroe Doctrine. Having fronted the Warrior River Boys for parts of four decades, Davis has refined and nurtured his vision of traditionally-based bluegrass while consistently presenting among the finest live showcases of the music’s vibrancy. 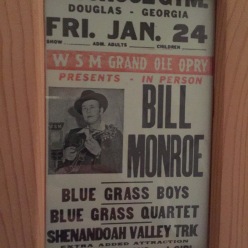 For his first album in almost ten years, Davis returns to Rounder Records with a well-considered collection of music from the early years of the twentieth century. Didn’t He Ramble: Songs of Charlie Poole is the first Warrior River Boys album since Davis completed his incredible Rebel Records aural triptych in 2009: Troubled Times, David Davis & the Warrior River Boys, and Two Dimes & A Nickel, three of the most impressive bluegrass albums released during the initial decade of this century. [Note to self: dig up and post original reviews of these albums.]

David Davis has the ability to provide insights into the genesis of bluegrass music as few others. He presents as simultaneously intense and affable, a man comfortable with the direction his career has taken him. He has studied the music that informed Bill Monroe’s music, has identified for himself the threads and tendrils that were woven to create bluegrass. These insights inform his music, whether creating impressive interpretations of previously unrecorded songs or crafting fresh understandings of familiar songs, conveying universal experience.

The music of Charlie Poole and the North Carolina Ramblers comes from the post-World War I, pre-Depression era of American history, string band music that influenced generations of professional and amateur pickers and singers. Many of the songs contained within Didn’t He Ramble: Songs of Charlie Poole are well-known, but Davis and co-producer Robert Montgomery have also included less familiar numbers while eschewing proverbial standards such as “Don’t Let Your Deal Go Down” and “Take A Drink On Me,” songs already oft recorded in bluegrass.

Still, a spirited and instrumentally well-arranged take on “White House Blues” is included as is “Girl I Left In Sunny Tennessee,” songs every jam regular well knows. Late in the set, a smooth rendition of “If The River Was Whiskey” is offered, with Davis’s voice and light, southern drawl ideally suited to the meandering song.

An album of considerable variation, an acceptance of life’s departures is an apparent theme. Whether pining for a distant love (“Where The Whippoorwill Is Whispering Goodnight”) within a song replete with acute detail (“Around that door the same old ivy vine is clinging,” a vivid image of desolation), cutting off a proposal (“One Moonlight Night”), or acknowledging the ways of a family’s ‘black sheep’ (“He Rambled”), one senses that Davis and Montgomery were attracted to songs where everything wasn’t necessarily going to plan.

The ‘Frankie and Johnny’ lovers of “Leaving Home” reveal different strategies for moving on from their troubled relationship, and the protagonist of “May I Sleep In Your Barn Tonight, Mister?” should have anticipated the ‘fox and henhouse’ outcome of his hospitality.

Does sentimentality get better than the included renditions of “Old and Only In The Way” and “Goodbye Mary Dear,” an enduring war-time tale? I suspect not. The bluesy “Highwayman” fits alongside additional ‘blues’ numbers including “Ramblin’ Blues” and “Milwaukee Blues,” a song previously recorded with a different vocal arrangement on Troubled Times and which led Davis on his Charlie Poole exploration.

Long-time Warrior River Boys Marty Hayes (lead and harmony vocals, bass) and Robert Montgomery (banjo) remain within the fold, with Davis contributing his classic-styled mandolin playing and distinctive voice with Stan Wilemon on guitar. Guest fiddler Billy Hurt is featured across the album. The instrumentation is, as expected, top drawer. The closing “Sweet Sunny South” is extended a mite, allowing  all the players to be showcased to excellent effect. Wilemon’s guitar runs on “Ramblin’ Blues” are especially appealing, as are Hurt’s fiddle fills, while Montgomery gets great tone on the opening title track.