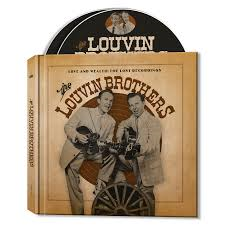 The Louvin Brothers recorded several outstanding albums (Tragic  Songs of Life, Satan Is Real, Country Love Ballads, A Tribute to the Delmore Brothers…) in a span of less than eight years, and even more timeless songs (“Cash on the Barrelhead,” “When I Stop Dreaming,” “The Knoxville Girl,” “Don’t Laugh”…). They were members of the Grand Ole Opry, recorded both gospel and secular material, sang in a manner that gave definition to ‘brother harmony,’ and likely would have been happier had they never recorded together. Ira wouldn’t manage his vices, and Charlie couldn’t tolerate them.

Their music was unadulterated old-school, radio show country, elemental even to the development of the music. The Louvins are held in the same esteem as the Carter Family, Hank Williams, and George Jones, and were as influential to bluegrass music (which they didn’t play, despite Ira’s fierce mandolin playing) as they were on country music. They have been the subject of a (uneven, and uninspired) Grammy-winning tribute album Livin’ Lovin’ Losin’: Songs of the Louvin Brothers as well as an alternate greatest hits, annotated by notable contemporary artists, Handpicked Songs 1955-1962. They are members of the Country Music Hall of Fame.

This archival set is comprised of demos recorded between 1951 and 1956, prior to and during their association with Capitol Records. In extensive notes Colin Escott details the origin of these songs, and their place within the Louvins legacy. A handful of these songs are known to all who appreciate roots and Americana music, including “Are You Missing Me?” (Jim & Jesse McReynolds), “Take My Ring From Your Finger” (Johnny & Jack), “Love and Wealth” (Carl Story, The Osborne Brothers), and “Bald Knob, Arkansas” (Vern Williams, Open Road).

Over the years, several were eventually recorded by the Louvins, especially gospel numbers which largely populate the second disc of the set: “Preach the Gospel,”  “The Sons and Daughters of God,” and “Insured Beyond the Grave,” to name three. “Red Hen Hop,” presented here as the swinging and cluckin’ “Red Hen Boogie,” is one of the familiar secular songs recorded by the Louvins included. “(I’m Changing the Words To) My Love Song” goes back to the brothers’ earliest recordings.

I am far from a Louvin Brothers’ expert, but some of these songs are absolutely riveting, and as far as I can tell never appeared on a Louvin release: warning, I could be wrong! “Streamline Heartbreaker” was recorded by Roy Acuff in 1964, and as far as I can tell didn’t do much for him. But, what a song as presented here: the close, complementary harmony missing from the Acuff version is what makes this Louvin take indispensible. “That’s My Heart Talking” was cut by Boots Faye & Idaho Call in 1952; listening to the Louvins’ demo take, one truly wonders why they never recorded the song.

“Discontented Cowboy” is less essential, but one can understand the intent behind the song: have a hit with one of the day’s cowboy singers. Two of the stronger songs on the set are “Don’t Compare the Future With the Past” and “Two-Faced Heart,” songs that I can’t find record of being cut. “Bald Knob, Arkansas” is typically recorded with more than a little bluegrass pep, but is presented here with a sentimental, almost maudlin pace.

I’ve often stated most of what I know about religion comes from bluegrass and Louvin Brothers songs, and I supposed they taught me a bit more with their unadorned takes of “Born Again,” “I Love God’s Way of Living,” and “You’ll Meet Him in the Clouds.” Their voice soars on these takes, and one comprehends the importance these songs of faith had to both Charlie and Ira.

The set closes with five terrific songs, “Measured Love,” “Kiss Me Like You Did Yesterday,” and “Never Say Goodbye” among them, that are as strong a coda as a 50s vocal-based country act could hope to have within their repertoire.

This crystal-clear, two-disc set, featuring exceptional notes and photos, and available on vinyl, is absolutely essential for all who appreciate early country music and The Louvin Brothers’ significant role within it.

One thought on “The Louvin Brothers- Love and Wealth: The Lost Recordings review”