From the extensive if not valued Fervor Coulee Archive: 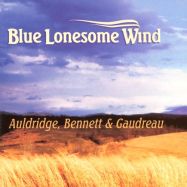 Auldridge, Bennett & Gaudreau inhabit that frequently uncomfortable place between retro- traditionalism and artistic experimentation; with Blue Lonesome Wind, their sophomore effort, ABG has achieved a melding of musical alchemy which should satisfy fans of all bluegrass genres.

No one can argue the pedigrees of these masters.  Mike Auldridge, long an upper echelon resophonic player, has consistently produced inspired and progressive accompaniment with the Seldom Scene and Chesapeake.  Mandolinist Jimmy Gaudreau, also formerly of Chesapeake, has lent his deft playing to the Tony Rice Unit and J. D. Crowe & the New South; Gaudreau was featured on Crowe’s classic Live in Japan.  Richard Bennett, has quietly establishing his presence in the bluegrass world with smooth flatpicking and a gentle voice ideally suited to the music we love.

Four of the numbers, including three instrumentals, were written by Bennett and Gaudreau, while ABG have selected others by talents such as Liz Meyer and Rodney Crowell.

While their instrumental mastery is inarguable, what raises ABG above some other performers is the rich authenticity of these distinct yet complementary vocalists.  The pearl glistening most true is Richard Bennett’s home spun vocals, at times vaguely reminiscent of Gordon Lightfoot, harkening a generation without a splash of false showmanship; his self-penned “Satisfied To Stay” should have been written in the ‘50s.

The album’s showcase piece may be “Sweet Prairie Hay,” written by Bill Caswell.  The entire band demonstrates expressive musicality while giving credence to the adage ‘less is more’; each instrumentalist is allowed to shine without resorting to one-upmanship.  On this number, Gaudreau’s tenor is ideally suited to the forsaken reminiscences of a condemned prisoner.

The instrumental “Welcome to New York” was originally a banjo showpiece when recorded by the Country Gentleman.  Arranged to feature Mike Auldridge’s resophonic guitar, it provides stark juxtaposition to the “long and empty” days in the “City of Lost Souls,” the number it precedes; Richard Bennett, plunging to the depths of bluegrass soul, captures the sense of aimlessness felt by many existing within urban business environments.

Another instrumental, “Dog Pause,” could be retitled “Dawg Paws” as, to this listener’s ears, it pays tribute to the lasting effect David Grisman has had by extending the parameters of bluegrass.

Blue Lonesome Wind is a definite ‘A’ List recording- strong in spirit, sincere in execution.

Origninally published in 2001, Bluegrass Now. My first piece for them, I believe.