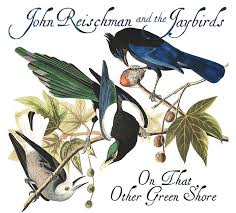 John Reischman & the Jaybirds
On That Other Green Shore
Corvus Records
http://www.thejaybirds.com/

It has long been known that John Reischman & the Jaybirds are one of my favourite bluegrass combos. To my ears, they have everything I expect from a band—vocal complexity and diversity, exceptional instrumentation and harmonic interplay, rock solid material with a curiosity  for the past and the ingenuity of creative originality.

When I was booking bands for the local association, The Jaybirds were the first non-locals I pursued. In subsequent appearances they never disappointed. I have seen them live about as many times as any bluegrass band I have witnessed, and even briefly used their “Jaybird Ramble” as my radio show theme song.

So, I’m a fan. But I am also a critic, and understand perhaps why they have never ‘broke through’ within the bluegrass world. Being based in western Canada has possibly been an impediment. I’ve heard some say that can appear a bit too polished, and maybe have at times appeared a bit ‘stiff’ on stage, especially early on. Still, the quality of their five previous full-fledged albums (and a seasonal EP) are without question—one of the strongest catalogues any bluegrass band can present since their debut of 2001. Why they are still not as recognized as other bluegrass bands—the Balsam Ranges, the Gibsons, the IIIrd Tyme Outs, and others—remains a mystery to my way of thinking.

John Reischman—having played with the Good Ol’ Persons, Tony Rice, John Miller, Kathy Kallick, and more—has long been one of bluegrass music’s most impressive and versatile mandolinists. Deeply influenced by Bill Monroe, Reischman has had the added benefit of being able to not only follow the inspiration of the instrument’s traditional Master, but to hear and work with others to provide guidance as well as the dedication to shape the instrument and its musical presentation in his own image.

Reischman’s bandmates Nick Hornbuckle (a more than impressive 5-stringer playing in an adapted 2-finger style), Trisha Gagnon (a tasteful bassist with an incredible voice in both lead and harmony positions),  Greg Spatz (an immensely sensitive and versatile fiddler and, as an aside, a formidable writer of prose), and Jim Nunally (a man of many hats including producer, absolutely devastating guitarist, and a singer rivaling Del McCoury, in my opinion) are unparalleled on the Canadian bluegrass scene (the fact that two-members of the group are naturalized Canadian citizens and only Gagnon is Canadian by birth doesn’t escape me) and—should this be a competition—could stand mic-to-mic with any of the most prominent bluegrass bands. [Someone will need to be the referee here, but I believe I may have just written a 113-word sentence that is almost grammatically justified.]

With the release of On That Other Green Shore this summer also comes news that Jim Nunally has left the group, the first personnel changeover the group has experienced. As I’ve already noted, Nunally has been one of the five pillars of the group, and his departure is significant. His playing and singing, as well as personality and songwriting, will be missed. For the unfamiliar, sample the two-song burst mid-set on Field Guide: “Arrowhead,” a Hornbuckle composition, features stunning flat-picking from Nunally while “Shackled and Chained,” one of his songs, is one of Nunally’s many fine vocal performances as a Jaybird.

One That Other Green Shore is not terribly different from previous JR&JB releases, and that is no criticism. The group has established an appealing and winning formula. The group boasts five song- and tune-writers, four vocalists, three-part harmonies, an untouchable duo of lead singers in Gagnon and Nunally, and a singular focus on making bluegrass music that is dynamic and memorable. As they typically do, the Jaybirds here refresh under-appreciated (or at least, under-known) songs from the Americana-roots-old time traditions, mix in some gospels and cracking instrumentals, and a handful of instrumentals as well as (this time) a song from The Beatles to create a unified representation of modern bluegrass.

Gagnon’s “I Don’t Want to Say Goodbye,” written upon her father’s passing, is not only emotional but also soothing. Two numbers feature the Jaybirds’ four-part vocal harmony ‘wall of sound.’ “You’ve Got To Righten That Wrong” and “Don’t You Hear The Lambs A-Crying” come from previous times but seem entirely apropos to current world circumstance, perhaps in ways the originators never intended. Spatz doesn’t contribute an original fiddle tune this time out, but brings to the group Caridwen Irvine Spatz’s “Thistletown,” a mournful and introspective piece well-placed within the 13-song set.

Nanually’s “Gonna Walk” features strong guitar lines, and I suppose serves as a fitting farewell nod to the group of which he has been integral the better part of two decades. “Today Has Been a Lonesome Day” is a song we’ve long heard at Jaybird shows, but makes its recorded debut here: interestingly, for a number that the group first worked up long ago, Patrick Sauber (who is the newest Jaybird) joins the group here on baritone.

Reischman has written dozens of memorable instrumentals, and “Daylighting the Creek” (listen to Spatz’s fiddle here—dang!) and “Red Diamond” join the list. His lead take on Paul McCartney’s “Two of Us,” in duet and close harmony with Gagnon, is a highlight of this recording. As they have done before (think “Shady Grove” from Vintage & Unique and “The House Carpenter” on Stellar Jays) the Jaybirds inject new shades to a familiar piece with the closing “Katie Bar the Door.”