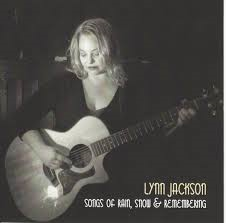 I hate coming late to the game, but such is the situation as I first encountered Lynn Jackson this past month.

The Kitchener, ON singer and songwriter is on album number eight with Songs of Rain, Snow, & Remembering and I don’t think I’ve previously heard of her. Given the clarity of her voice and the strength of her material, one would hope I would have remembered had I encountered her music.

Songs of Rain, Snow, & Remembering is (largely) an acoustic album, produced by Norman Blake. Admittedly, I got quite excited when I saw Blake’s name in the album notes, having long been an appreciator of the old-time folk instrumentalist. Who knew Norman Blake is also a Scottish-transplant to Canada most famous as part of Teenage Fanclub, a band I may have heard of without ever having heard?

Well, other than most of the world excepting me?

Lynn Jackson reminds me a lot of Mary-Chapin Carpenter, and yes the hyphen is purposely included as, long ago, that is how I came to know MCC, before the stadiums and theatres, back when she was recording Hometown Girl and State of the Heart and still had a hyphen in her given name. That is the MCC of which Jackson reminds me, along with Cheryl Wheeler, Lynn Miles, and Shari Ulrich.

Jackson writes songs that sound very personal while embracing universal appeal and circumstance. That I am a 50+ white male that can’t play the same chord twice in a row matters not—I can relate to the stories Jackson tells, the emotions she conveys, the longing she communicates. Confessional without discomfort. “Riding Out the Storm” and “Water & Glass” are quite remarkable performances. The autumnal nature of the album is apparent—change, passing our prime, closing of chapters—and are brought to the fore on songs including “Winter Sun,” “Next Best Thing,” and “Long Winter.” Townes Van Zandt’s “Rake” is another highlight.

I don’t like the fret noise apparent on “Ribbons”; to me, such scrapes sound messy and irritating, distracting from the song’s moment. A shame that, as the songwriting apparent here is quite striking.

Folk? Perhaps that is the best label. File under: Good.