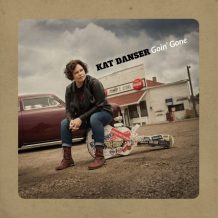 “Jumpin’ on the IV and II, hanging on the voodoo groove,” Dr. Kat Danser sings just a few moments into Goin’ Gone, her fifth album and second in a row in partnership with Steve Dawson—and first for his Black Hen label.

With the declaration made within “Voodoo Groove,” Alberta’s undisputed Swamp Blues Queen puts forth her road hewn CV: she is grindin’ it smooth and castin’ a juju spell…whatever that exactly means. To me, it is an assurance of razor-sharp, unabashed southern-influenced blues.

Individual credits are not provided, but between Danser and Dawson, the pair float their guitars over and through deep grooves established by Jeremy Holmes (bass and mandolin) and Gary Craig (drums and percussion) with substantial accoutrement from Jim Hoke (saxophone and harmonica) and Matt Combs (fiddle and mandolin). One can lose oneself in this meaty gumbo, overcome with the variety of aural flavours spicing their collaborative concoction.

Mississippi Fred McDowell’s “Train I Ride” is transformed, with Hoke’s brass notes playing off extended slide phrases and Danser’s sultry, yearning vocal. “Memphis, Tennessee” is a challenge, the city defending itself despite troubled history: “I made the blues on Beale Street when cowards covered their heads in sheets, and I do as I please because I am Memphis, Tennessee.”

I can’t figure out what the hell “Kansas City Blues” is about—a city ill-prepared for a snowstorm? Hattie McDaniel? A lover crushed by heartbreak? No matter, Danser’s voice is in top form on this crooning blues, as she is on the more straightforward title track and the light yet feisty “Chevrolet Car.”

Nothing is left to interpretation within “Hol’ Up Baby;” Danser ain’t done with her lover quite yet: “Maybe I ain’t always been true, but I ain’t over you.” Danser comes home on “My Town,” capturing the dichotomy of knowing (and loving) a place so well that it hurts to see its truths.

Reflecting the current political and social climate, “Light the Flame” is as close to rock ‘n’ roll as I think Danser comfortably ventures, and it is a compelling call to action —neither myopic nor ham-fisted. A coda of sorts, “Time For Me To Go” eases her listeners into the night, a farewell until we next hear from this northern master of the natch’l blues.

With Baptized By The Mud of 2013 establishing her bone fides to a more prominent degree, Kat Danser had a high mark to achieve with its follow-up recording. She has met and exceeded any expectations with Goin’ Gone, a testament to her maturity as a vocalist, songwriter, and guitarist. Teaming with the likes of Steve Dawson is seldom a regretful decision; together they have created a unified and convincing argument that further elevates Danser within the crowded blues field.